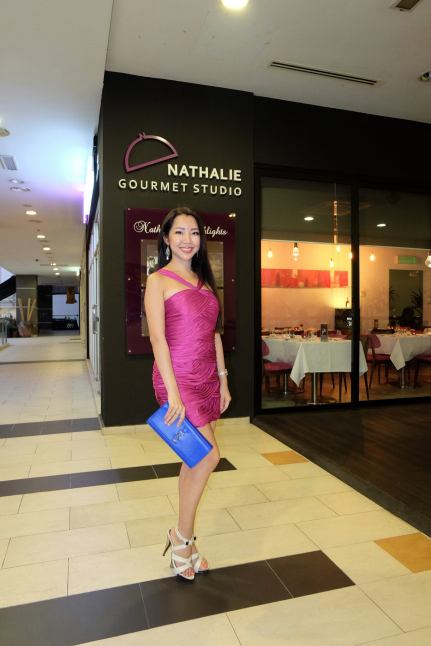 Janet, Evonne and I headed over to Nathalie’s Gourmet Studio in Solaris Dutamas, Kuala Lumpur on 21 March 2016 for a special French dinner  in conjunction with the “Goût de France” otherwise known as “Good France” organised by the French Embassy in partnership with G.H Mumm and Martell.

The French take their food seriously and the “Gastronomic meal of the French” is actually listed on the Representative List of the Intangible Cultural Heritage of Humanity in the UNESCO World Heritage list since 2010, and is defined as a “festive meal bringing people together for an occasion to enjoy the art of good eating and drinking”.

Therefore it is not surprising that the French are proud to showcase this art to the world and “Goût de France” was born. Launched in 2015, the initiative is organized for the second consecutive year by the French Ministry of Foreign Affairs and International Development, and Chef Alain Ducasse.

“Goût de France” or “Good France” is inspired by Auguste Escoffier, who launched the “Dîners d’Épicure” (Epicurean Dinners) initiative in 1912 – the same menu on the same day, in several world cities and for as many guests as possible.

In the words of Alain Ducasse: “French cuisine is the interpreter of a cuisine that has evolved towards lightness in harmony with its environment. The common point of this event is generosity, sharing and the love of what is beautiful and tastes good. It will be a delightful interlude and an opportunity to celebrate French cuisine worldwide.”

The event is held in 150 countries around the world in partnership with G.H.Mumm and Martell. French embassies and all participating restaurants will celebrate France’s gastronomy by inviting the public share a “French dinner” that showcases France’s vibrant, open and innovative cuisine, while remaining true to the values of sharing, pleasure and respect for the principles of high-quality, environmentally responsible cuisine.

In Malaysia, five (5) restaurants and one (1) culinary arts school participated in “Goût de France” from 19 to 23 March 2016, namely Maison Française, Nathalie Gourmet, Restaurant DC, Soleil, 20xc and Le Cordon Bleu Malaysia culinary arts school. Each one of the 6 participating chefs in Kuala Lumpur will offer a “French-style” menu in their restaurants based on a multi-course meal and fresh, seasonal and local products, paired with G.H.Mumm and Martell, while remaining free to highlight their own culinary traditions and cultures. The peak of this worldwide event was on the 21 March 2016, where a special dinner was hosted at the French Ambassador’s residence.

The canapes were paired with both the Mumm Cordon Rouge and Mumm Rose. The Cordon Rouge is a brightly sparkling, light golden yellow champagne with lots of fine and elegant bubbles. On the nose, the champagne gave aromas of ripe fresh fruit (white and yellow peaches, apricots), tropical notes (lychee and pineapple). Nosing it further reveals the fragrance of vanilla followed by notes of milky caramel, breadcrumbs and yeast, and finally aromas of dried fruit and honey. The champagnes gave a burst of freshness on the palate, followed by strong persistence.

The Mumm Rose has a relatively pale salmon pink colour with light orange highlights and abundant bubbles that create a fine and lively head. On the nose there were aromas of fruits of the forest and pink grapefruit, individual hints of strawberry, cherry and redcurrant, and delicate scents of caramelised vanilla thanks to the subtle presence of Mumm Cordon Rouge. On the palate, the Mumm Rose was lively, with flavours derived from fruits of the forest, with an elegant, fine and subtle freshness.

We all expected a whole scallop to be served and were quite surprised to see this. But our surprise soon turned to delight as we spooned the sort of scallop paste into our mouths. The flavour of the scallop went very well with the leeks while the curried toast gave that different dimension which complemented the scallops. Definitely a marriage of French food with local flavours here and it was a marriage made in heaven!

We then switched to Martell Cordon Bleu for the rest of the dishes. The cognac had a rich nose of orchard fruits like crystallized plums and apples with lots of spice notes, and a deep, golden copper colour. Delving deeper you will get some roasted notes like mocha coffee, toasted almonds, and vetiver, as well as rich spice aromas like cinnamon, orange tree flower, honey and beeswax.

On the palate, the cognac had a well-rounded mellowness, and a sustained finish with fruit and spice notes – the product of the high-quality Borderies eaux-de-vie that also gives Martell Cordon Bleu an elegant, mellow and complex character.

I really love foie gras and this dish was absolutely a joy to eat. The earthy and rich flavours of the foie gras went absolutely brilliantly with the Martell Cordon Bleu while the hints of truffle was enough to provide an extra dimension but not overpower the dish. The apple cider emulsion prevented this dish from becoming overwhelmingly rich, with its sweet and fresh flavours balancing out the dish. 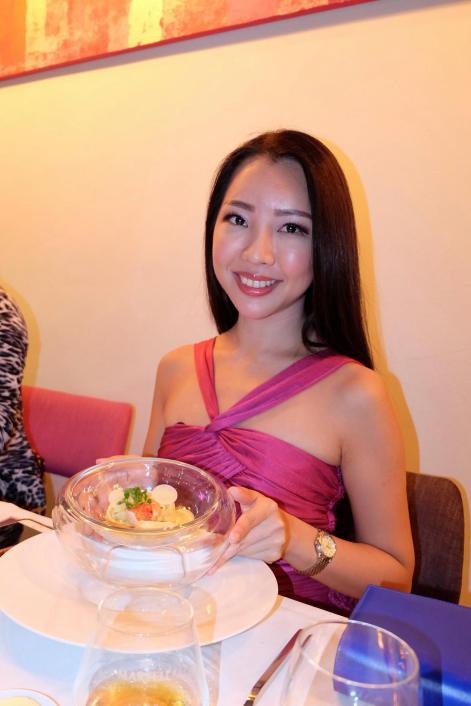 This dish was simply awesome and so delicious that I finished it in two (2) minutes flat! Pieces of lobster encased in the tortellinis then covered with lobster bisque cream, so very flavourful and delicious that I really wished there was more!

Sweetbreads are actually not breads but the thymus gland (from the throat) and the pancreas gland (from the heart or stomach) that are taken from calves or lambs. Locally us Chinese would call them the spare parts of an animal and there are popular Chinese dishes like bak kut teh that makes good use of them.

The veal was tender and pretty much melted in the mouth while the Porcini mushrooms and sweetbreads lots of earthy flavours to match. This also went well with the cognac imparting its spiciness to complement the dish.

What a salad after the main dish? Well the main star of this dish was the Gorgonzola cheese which was fried until crispy on the outside but lovely and gooey on the inside! I let the gooey cheese flow out and cost the greens like a dressing. Simply marvellous! (Fortunately Chef Nathalie didn’t serve blue cheese as the general indication was that not many at the table with the exception of me, knew how to eat it.)

This went so well with the Martell Cordon Bleu with the sweet and creamy flavours of the dessert contrasting against the spicy cognac. The berries added a nice touch of acidity too while the almond ice cream provided a hint of nuttiness!

And of course, no French meal is complete without macarons and Chef Nathalie’s macarons are very famous among KL folk! 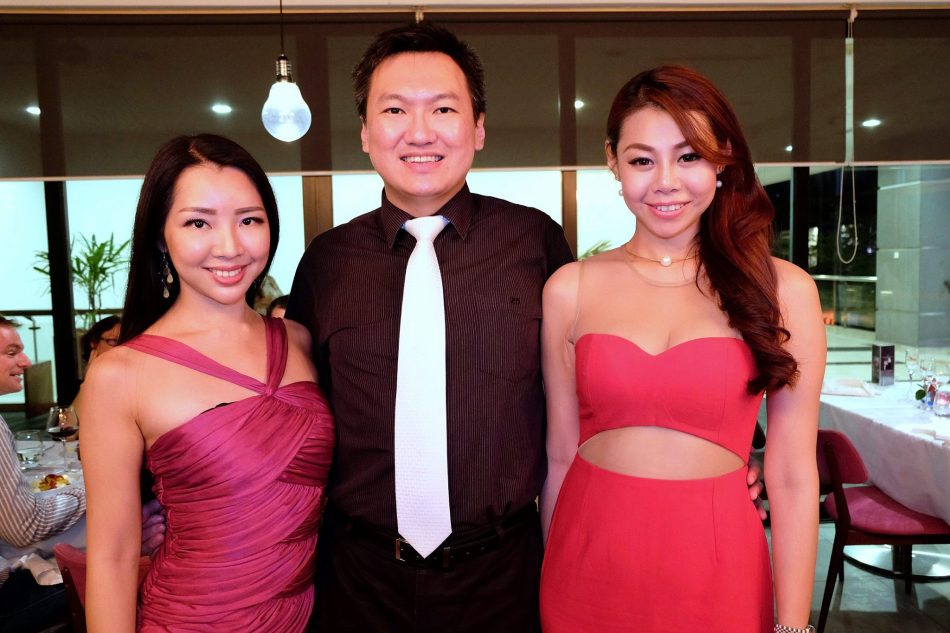 Truly a fantastic dinner, and many thanks to the French embassy, Nathalie’s Gourmet Studio, G.H. Mumm and Martell for having us be a part of it.

For more info, head over to http://www.ambafrance-my.org

The photos above were shot using the FUJIFILM X-T10.

Below are some photos shot by Leon Ng who was the professional photographer for the event.

Click on the individual photos to open a larger version. 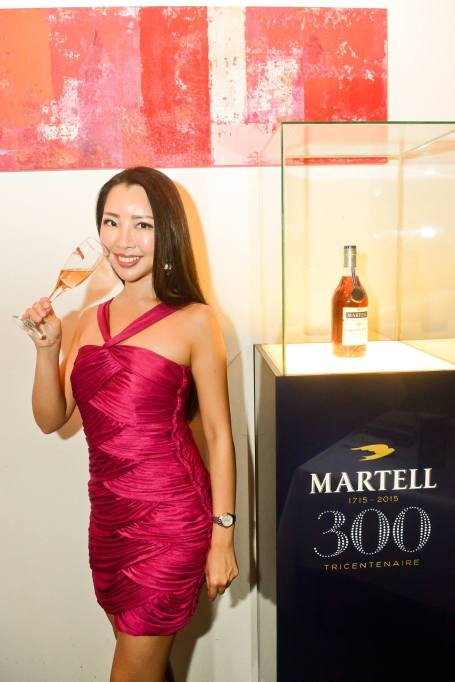 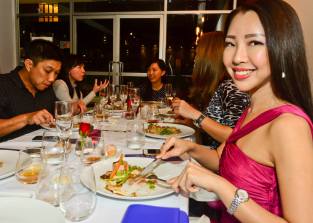 While we’re on the subject of French food, my partner in crime and I headed over to the Alliance Francaise on 19 March 2016 for the Buffet de la Francophonie or buffet featuring food and beverages from 18 French speaking nations including Belgium, Canada, Egypt, Georgia, Guinea, Laos, Vietnam and Switzerland to name a few…and of course France!

There were also cultural shows by the various nationalities which included dances, music and even a rap performance. 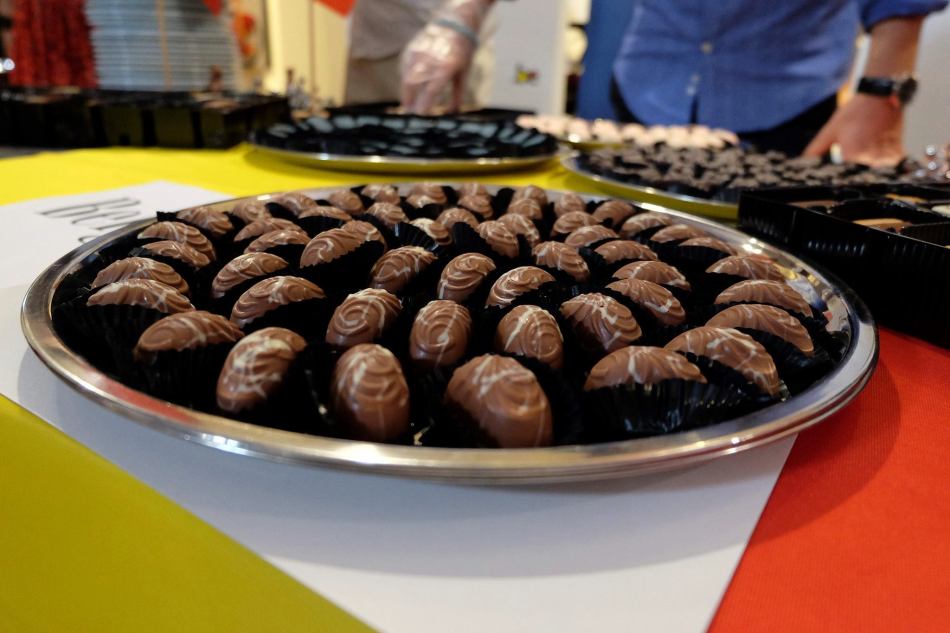 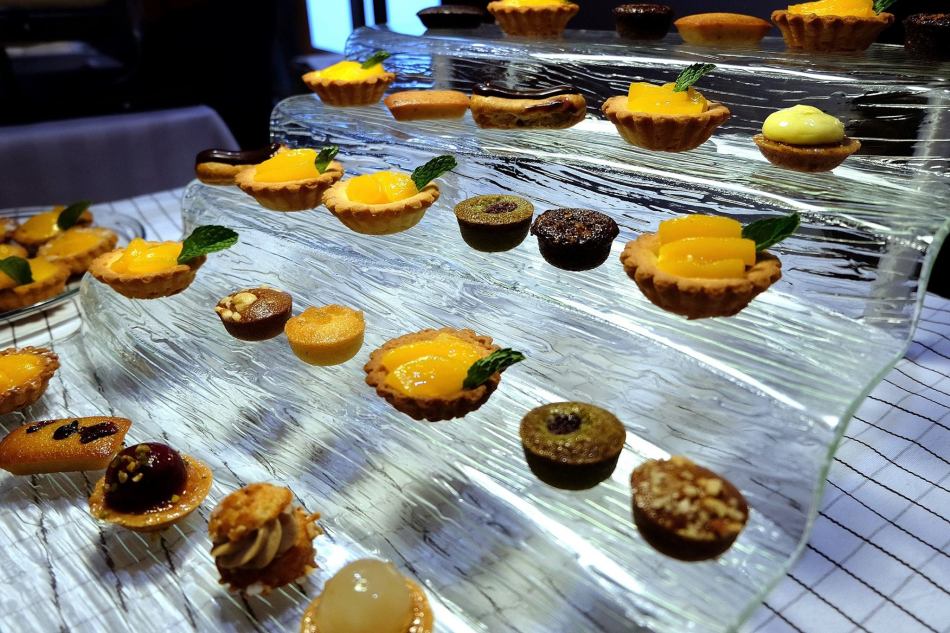 For more info, head over to http://www.ambafrance-my.org/

And last but not least…

Jazz Bars are becoming quite popular these days and the latest joint to open is in the posh neighbourhood of Bangsar. I headed over to check out the launch of UPSTAGE Lounge on 17 March 2016. UPSTAGE Lounge is directly above Rendez-vous French Restaurant along Lorong Maarof (which is also under the same owners).

We got there early so we decided to have some food downstairs first.

Good thing I love all sorts of cheese but as the portion of cheese was quite generous I fully recommend sharing this as the cheese gets quite rich after a while.

Ahhhh finally a French escargots dish that isn’t totally smothered in cheese and cream. The presentation was unlike anything I’ve seen before. It tasted pretty good though and I soaked up the leftover garlic oil with the lovely warm crusty breads that’s complimentary with the meal.

We also had the “Marquise au chocolat” Dense chocolate mousse served with mint ice cream – RM20.00 (you can refer to my previous review at Rendez-vous for the pic) and when they say “dense” they really mean it but it was very delightful to eat!

More info on Rendez-Vous at https://www.facebook.com/rendezvousbangsar/

After dinner, we headed upstairs to UPSTAGE Lounge where Maya Pavlovska and her band were performing. She’s really a talented performer and knows how to interact with the crowd getting everyone into the mood.

We also tried a couple of tartines from the menu.

Small pieces of salmon (which makes it easier to eat than big slices) with some cream. Nice but definitely not enough to fill me up so I also had the one below!

Butter chicken is one dish that I can never refuse. This one was not too spicy but spicy enough to have loads of flavour.

At the moment, the menu consists mostly of hot and cold appetisers/ starters however a full bar is available and you can expect the bar staples like draught beers, liquors, wines, champagnes, aperitifs, etc. etc. and even some signature cocktails!

If you’re looking at a heavier meal, I suggest you dine downstairs at Rendez-vous first before heading up to enjoy some soothing jazz music.

UPSTAGE Lounge is located at:

timchew.net is also a trusted media partner of the world’s top brands as well as renowned hotels in Malaysia and the region such as Four Seasons, Hilton, Banyan Tree, St. Regis, Sheraton, Westin, Hyatt, Shangri-La and more!