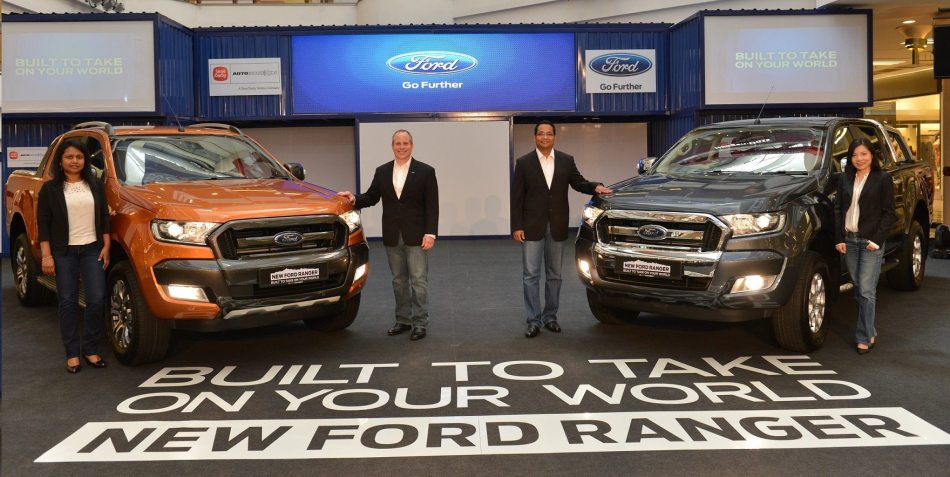 The Ford Motor Company and its Malaysian distributor Sime Darby Auto Connexion (SDAC) launched the new (2015) Ford Ranger in Malaysia at One Utama Shopping Centre in Petaling Jaya on 8 October 2015.

“True to our ‘Built Ford Tough’ heritage, the new Ranger offers more power and payload capacity than any other pickup in Malaysia. It’s also the only pickup to feature a range of new safe and smart technologies, and raises the level of refinement in the segment,” said David Westerman, managing director, Malaysia and Asia Pacific Emerging Markets, Ford Motor Company.

The Ranger’s suite of new technologies are complemented by a stylish, smart and functional new interior, as well as best-in-class water-wading, towing and payload capabilities.

“We know that Malaysian drivers want the ruggedness of a truck and the comfort of a passenger vehicle, and we’re confident the new Ranger offers them this versatility, helping them achieve more, whether at work or with their family,” said Syed Ahmad Muzri Syed Faiz, managing director, Sime Darby Auto Connexion.

The new Ranger is able to wade through water up to 800mm deep, and has 230mm of ground clearance. That combined with a 28-degree approach angle and 25-degree departure angle, allows the new Ranger to handle even the most extreme terrains with ease.

An electronically controlled transfer case allows drivers in 4×4 models to shift on the fly from 4×2 to 4×4 high with a knob on the centre console. For low-speed torque or additional downhill braking, drivers can also engage low-range 4×4 gearing, while an electronic locking rear differential helps to improve traction in difficult conditions. These off-road strengths are matched by towing capability of up to 3,500 kg and exceptional payload capacity of up to 1,200kg.

Ford engineers have fine-tuned the Ranger’s suspension for additional comfort and even better handling, and it also comes with an electric power-assisted steering (EPAS) system, which provides precise steering with a natural and confident feel. With EPAS, steering is light and manageable for low-speed manoeuvring, such as parking, and precise at higher speeds – with assistance varying as necessary based on speed, steering wheel angle, cornering forces and acceleration or deceleration.

The new Ranger comes with a selection of powerful and efficient engines paired to either a six-speed automatic or manual transmission.

The latest generation of its globally proven 3.2-litre Duratorq five-cylinder TDCi diesel engine provides maximum power and torque for heavy-duty towing,. Upgrades including an updated exhaust gas recirculation system help to improve fuel efficiency by up to 12 percent, while putting out a best-in-class 200 PS of power and 470 Nm of torque.

There is also the latest generation of Ford’s 2.2-litre Duratorq four-cylinder TDCi diesel engine, which delivers significantly improved fuel efficiency and refinement while providing 160 PS of power and 385 Nm of torque – an increase in both power and torque over the current 2.2-litre Ranger.

The top of the line WildTrak variant features SYNC 2, the latest generation of Ford’s in-car connectivity system that comes with an eight-inch colour touchscreen to operate phone, entertainment and climate control using a simple voice command system. The XLT variant comes with SYNC with a 4.2-inch display.

Another first-in-segment for the new Ranger is Ford’s exclusive MyKey system, which allows the programming of various features, such as setting the maximum speed limit, a seatbelt reminder and the maximum volume of the audio system.

The new Ranger is the only pickup in Malaysia to include audible parking sensors in both the front and rear. It also features Front and Rear Park Assist and a rear-view camera, which is certainly useful when reversing a big vehicle like the Ranger. 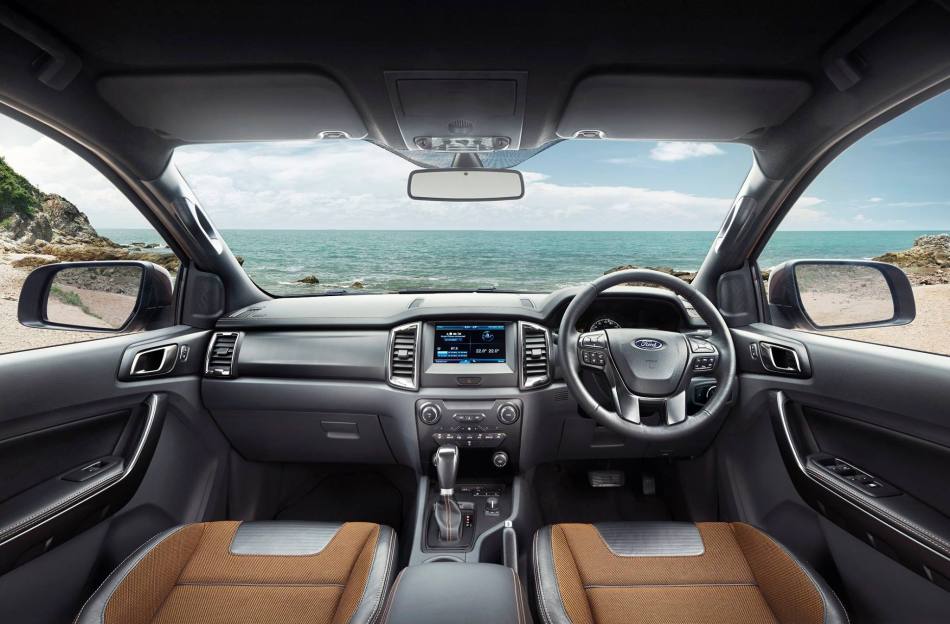 Two other convenient features are a light installed in the cargo tray, and a 230-volt power socket that can be used to power a laptop computer.

The Ranger’s reinforced safety cell comes with frontal impact airbags for the driver and passenger in all variants, and a class-leading six airbag configuration in the WildTrak variant, which also features side and curtain airbags.

The Ranger also comes fitted with Forward Alert, a smart driver assistance feature that gives drivers a visual and audible warning if the vehicle in front gets too close.

The Wildtrak variant features Adaptive Cruise Control, an intelligent feature that uses radar sensors to detect traffic ahead, and automatically adjusts the cruise control speed to maintain a safe distance from the car in front.

It is paired with the Lane Keeping Aid, which uses a front-facing camera located behind the rear-view mirror to read lane markings and detect if the driver unintentionally leaves their lane. Lane Keeping Aid uses a smooth steering torque intervention to gently pull the driver back on course. If the driver continues to drift off course, Lane Departure Warning can warn the driver by vibrating the steering wheel.

Ford’s Electronic Stability Control (ESC) and ISOFIX child safety mounts also come standard, making Ranger the only pickup truck in the Malaysia to offer these two important safety features across all variants. ESC is an active safety system that improves driver control under all conditions and maximises vehicle traction and stability both on and off-road, and automatically reduces engine torque and/or applies a braking force to individual wheels if it senses the vehicle is turning more or less than intended.

Other smart technologies across all variants include Hill Launch Assist – which holds the Ranger in place for up to three seconds when the driver removes their foot from the brake – Adaptive Load Control, which maximises control when carrying heavy loads, and Emergency Brake Assist.

The new Ranger’s has a bold, modern look with a more muscular hood flowing into a strong new trapezoidal grille, with projector headlamps lighting your way.

The new Ranger was designed to be a tough and dependable truck, with a stylish, sleek and modern interior, while packed with an array of smart technologies. While the interior is more car-like, the materials used are extremely practical and durable to handle the harsh life of a work truck. 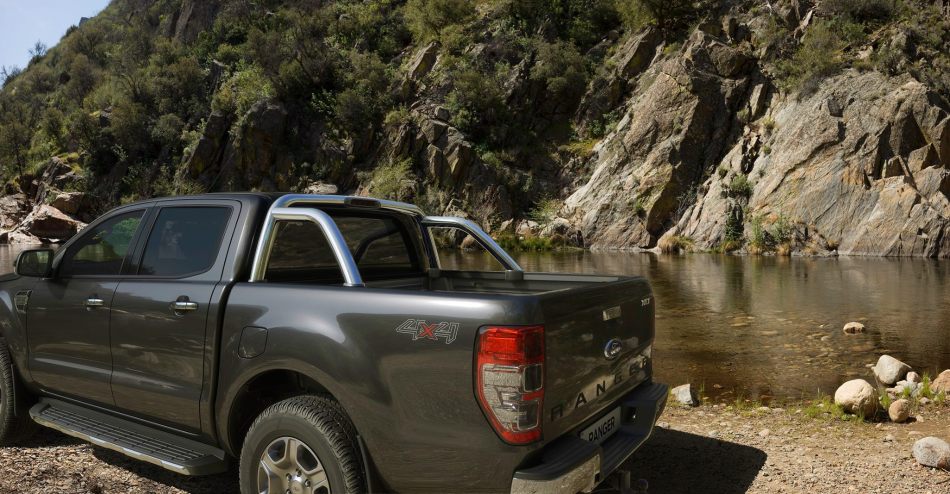 In conjunction with the launch of the new Ford Ranger and the roadshow at One Utama Shopping Centre, customers got to experience all the capabilities of the Ford Ranger for themselves at the ‘Tough Done Smarter Experiential Test Drive’ at Central Park Avenue from 8 to 11 October 2015.

Each visitor was paired with a professional driver, who lead them through an exciting course that simulates tough driving environments, like wading through water and navigating steep terrain. A variety of the new Ranger’s features will be demonstrated, including driver assist technologies like the e-Locking Rear Differential, Hill Launch Assist, Hill Descent Control, and Forward Collision Warning, as well as Ford’s SYNC 2 connectivity system.

The new Ford Ranger is currently available in showrooms, and the official pricing for the Ranger in Peninsular Malaysia are as below:

For more information, head over to www.ford.com.my